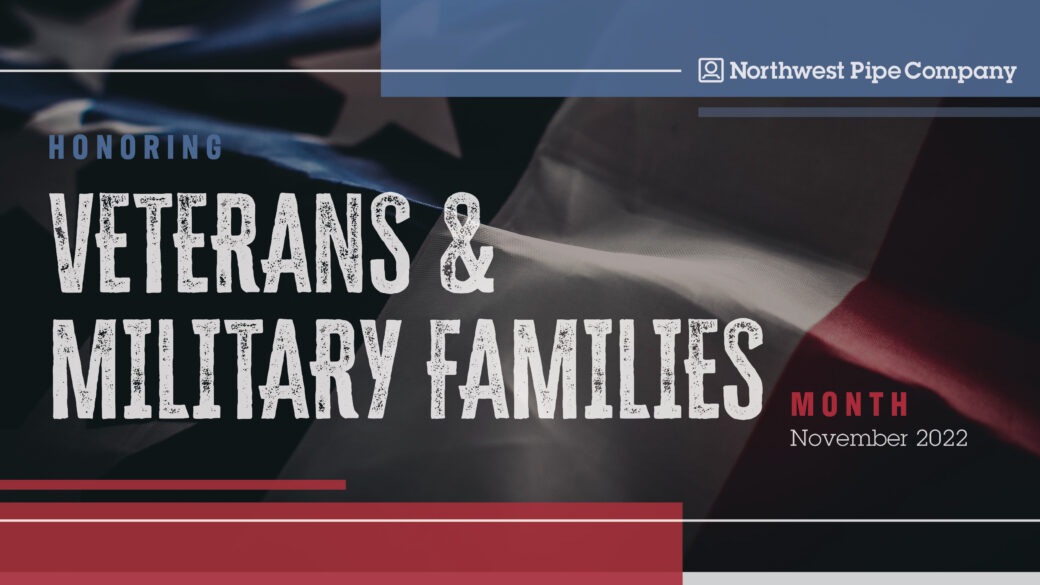 November is National Veterans and Military Families Month, recognizing the sacrifices and bravery of our Nation’s service members and the resilient families who support them. As a proud employer of veterans across the U.S., Northwest Pipe Company celebrates, with gratitude, their military service and the essential contributions they bring to our organization.

Throughout the month, we’ll be sharing interviews with veterans here at Northwest Pipe, discussing their military and career experiences, and the people and values that have inspired them along the way.

As the Vice President of Sales for the Western Region, Mike is responsible for providing purpose, direction, and motivation to the Western Region Sales Team. Mike and his team’s daily efforts aim to bridge the gap between Northwest Pipe Company’s financial objectives and the commercial opportunities in the market. By gaining and maintaining personal relationships within water districts, engineering firms, and construction companies, Mike’s team works to identify projects, develop favorable specifications, and provide high-quality product-solutions for our clients. Within Northwest Pipe Company, Mike’s team provides a forecast of the steel pressure pipe market to help ensure that our manufacturing facilities are appropriately staffed and equipped to meet the market’s future demands.

1. What is your job title and how long have you been with Northwest Pipe?

I’m the Steel Pressure Pipe Vice President of Sales for the Western Region, and I’ve been with Northwest Pipe for 14 years.

2. Tell us about your time in the service – what motivated you to enlist and how long did you serve for?

I received a postcard in the mail when I was 17 years old offering me the opportunity to “Be all that I can be.”  The Army’s message of service to the country and leadership resonated with me.  I studied mechanical engineering at the United States Military Academy in West Point, New York, for four years and was commissioned as a 2nd Lieutenant in the Aviation Branch of the US Army (MOS: 15A).  It took about 18 months to complete the Army’s flight school at Fort Rucker, Alabama, where I was qualified in the OH-58A/C and AH-64D Apache Longbow helicopters.  I served as a platoon leader with an attack helicopter unit in the 3rd Infantry Division stationed at Hunter AAF, Savannah, Georgia.

During this assignment, the unit deployed to Kuwait and participated in the 2003 invasion of Iraq. Our attack battalion was one of the first units across the Kuwait/Iraq border, conducting shaping operations the night before the ground attack began. We engaged in three weeks of high intensity combat, providing deliberate attacks against fortified Iraqi positions, close combat support of infantry/armor units, intelligence/reconnaissance collection, and MEDEVAC escort missions. The unit remained in Baghdad supporting the development of the Green Zone, civil reconstruction activities, and eventually counter-insurgency operations. I earned an Air Medal with Valor Device for actions during this deployment.

My next major assignment was a three-year tour at Camp Humphreys in Pyeongtaek, South Korea. As a Captain, my first duty in Korea was to command an Air Calvary Troop outfitted with eight Apaches. Our primary mission was to maintain a deterrence presence on the peninsula in support of the armistice between North and South Korea and to train for the eventuality of war.  My final duty in the Army was the command of a 125-person Aviation Maintenance Company responsible for the upkeep of a battalion of 24 Apaches.

I’m grateful to have had the opportunity to serve. It was both a humbling and rewarding experience.

3. Describe your transition from military to civilian life and how it led you to your current position?

I was honorably discharged from the Army in 2008, opting for a more-stable lifestyle for my family. Northwest Pipe Company was my first (and only) post-military employer. While there may not be an apparent compatibility between destroying tanks and manufacturing pipe, I’ve found the honest, hard-working culture here at NWP to be very similar to the work environment in the Army.

4. What’s the most exciting or interesting thing about your job?

Being a part of the water industry during this age of cyclical droughts and floods is inherently interesting. Bidding large, high-stakes projects is probably the most exciting part of my current job. It’s incredibly satisfying securing large, profitable jobs for our team to manufacture.

5. Name two things that always brighten your day— one at work and one outside of work?

Receiving and being able to pass-along compliments about the quality of our products or professionalism of our team always brightens my workday.  Getting some fresh air/exercise at the end of the day and supporting my family in their endeavors are usually the high points of my day outside of work.

6. Which of the Northwest Pipe ACT Values (Accountability, Commitment, and Teamwork) resonates most for you in your role and why?

Teamwork is probably the most important ACT value within NWP. The disparate locations of our team—numerous plants, remote sales, project managers, estimating, and corporate headquarters—present unique challenges in maintaining a sense of teamwork. Teamwork doesn’t happen by accident; the company is much more successful when the ‘daylight’ between us is kept to a minimum.

7. How did your military career experience prepare you for your current role?

Many of the values that the Army espouses, like duty, respect, service, honor, and integrity, are the same characteristics that lead to success in our business. Additionally, the military teaches a continuous decision-making cycle called the OODA loop. This process of observing, orienting, deciding, and acting translates well to the decisions we make here at NWP related to our commercial positioning.

8. Name someone who has been a source of inspiration in your life and why?

9. What advice do you have for other veterans entering your profession?

Transitioning from the military can be difficult on several fronts.  Like it or not, the military becomes a part of your identity and sense of self. Carving out a new role and establishing a new identity ‘out-of-uniform’ can take time and be frustrating at times. Be patient. Be open-minded. Work hard and stay positive.

10. What has been your biggest career or personal achievement?

Being a husband to a wonderful woman and a father to three amazing kids.